Tip Jar: A Smackerel of Something from Benjamin Hoff

I'm thoughtful, lately, with lots of (emotional? spiritual? seasonal?) changes going on. I moved the furniture around because I don't want to cut my hair, but I needed to feel in control of something. As if, huh? [Insert here any number of proverbs about the idea of control.]

I've always been a wallflower, my usual preference hanging out by the punch bowl rather than dancing. This works for me, and I've garnered many skills that help me stay in the shadows. Quietly quiet. Comfortably comfortable. Avoid eye contact and think invisible thoughts.

But now I'm being asked to dance. Uh. *Looks helplessly around?* Damnit.

Reaching out for some of my old favorite books is a nervous tick, and will only fend off the querents for a little while, but maybe this time around reading them I'll pick up on something I can use on the dance floor? 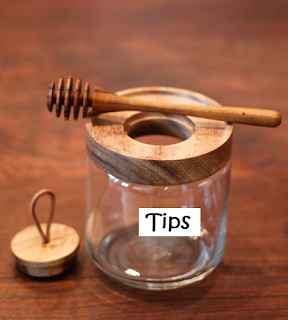 So today I pull from the Tip Jar the following quote --
"Christopher Robin has just asked Pooh a question:

'What do you like doing best in the world, Pooh?'

'Well,' said Pooh, 'what I like best --' and then he had to stop and think. Because although Eating Honey was a very good thing to do, there was a moment just before you began to eat it which was better than when you were, but he didn't know what it was called.

The honey doesn't taste so good once it is being eaten; the goal doesn't mean so much once it is reached; the reward is not so rewarding once it has been given... That doesn't mean that the goals we have don't count. They do, mostly because they cause us to go through the process, and it's the process that makes us wise, happy, or whatever...

What could we call that moment before we begin to eat the honey? Some would call it anticipation, but we think it's more than that. We would call it awareness. It's when we become happy and realize it, if only for an instant. By Enjoying the Process, we can stretch that awareness out so that it's no longer only a moment, but covers the whole thing."

-- Benjamin Hoff, The Tao of Pooh

What do y'all do when you're asked to do things that are extremely uncomfortable for you? Things that may or may not make you a better person for having done them? And let's not forget, none of us live in a bubble -- obviously whatever decision you make will have positive or negative (or more likely, both) affects on your loved ones. How does that play a part?

I would love some new tips, if you'd be so kind as to proffer them?


Total pages logged as of today: 183 but visit my Deadline Updates page for more info

Beta crawling up to the shiny black door of the dishwasher (a dishwasher, in and of itself, could be considered magical in my life -- I've never had one before and I love it. I still wash the dishes like I used to, but they're not taking up all my counter space on drying racks now. Is this shallow? I don't know. Maybe.) and giggling at his image reflecting back. Putting his hand up on the surface, patting the simulated hand in an ethereal high-five. His laughter, his crawling. Magical.
Posted by Deb Stevens at 3:19 PM