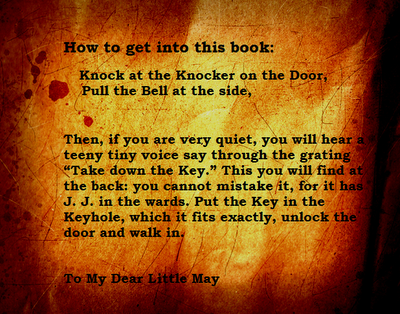 First of all (and I apologize that this may be a tiny bit off topic?), I'm not sure who May is, but I do know that if Hubs started anything with the dedication of, "To my Dear Little Deb," I'm positive I would just melt in the most delicious way. For whatever that's worth.

So have we all heard of Joseph Jacobs? I hadn't until recently, and if you're like me in this you can find some basics here and here.

His English Fairy Tales begins with the above introduction, and continues on to retell a bunch of old favorites. He classifies them as: "Of the eighty-seven tales contained in my two volumes, thirty-eight are Märchen proper, ten sagas or legends, nineteen drolls, four cumulative stories, six beast tales, and ten nonsense stories."

You can find the book in its entirety in many places online. For an amazing archival experience I suggest going to Project Gutenberg. If you just want the book with easy links to each story, Philipp Lenssen has put together a great page here where you can do that.

All this is to say that it's from Jacobs' book that I bring you today's Fairy Tale, which actually includes fairies this time. Fabulous? Yes. It includes the word "squinny." Even more fabulous? Most definitely yes.

Dame Goody was a nurse that looked after sick people, and minded babies. One night she was woke up at midnight, and when she went downstairs, she saw a strange squinny-eyed, little ugly old fellow, who asked her to come to his wife who was too ill to mind her baby. Dame Goody didn’t like the look of the old fellow, but business is business; so she popped on her things, and went down to him. And when she got down to him, he whisked her up on to a large coal-black horse with fiery eyes, that stood at the door; and soon they were going at a rare pace, Dame Goody holding on to the old fellow like grim death.

They rode, and they rode, till at last they stopped before a cottage door. So they got down and went in and found the good woman abed with the children playing about; and the babe, a fine bouncing boy, beside her.
Dame Goody took the babe, which was as fine a baby boy as you’d wish to see. The mother, when she handed the baby to Dame Goody to mind, gave her a box of ointment, and told her to stroke the baby’s eyes with it as soon as it opened them. After a while it began to open its eyes. Dame Goody saw that it had squinny eyes just like its father. So she took the box of ointment and stroked its two eyelids with it. But she couldn’t help wondering what it was for, as she had never seen such a thing done before. So she looked to see if the others were looking, and, when they were not noticing she stroked her own right eyelid with the ointment.

No sooner had she done so, than everything seemed changed about her. The cottage became elegantly furnished. The mother in the bed was a beautiful lady, dressed up in white silk. The little baby was still more beautiful than before, and its clothes were made of a sort of silvery gauze. Its little brothers and sisters around the bed were flat-nosed imps with pointed ears, who made faces at one another, and scratched their polls. Sometimes they would pull the sick lady’s ears with their long and hairy paws. In fact, they were up to all kinds of mischief; and Dame Goody knew that she had got into a house of pixies. But she said nothing to nobody, and as soon as the lady was well enough to mind the baby, she asked the old fellow to take her back home. So he came round to the door with the coal-black horse with eyes of fire, and off they went as fast as before, or perhaps a little faster, till they came to Dame Goody’s cottage, where the squinny-eyed old fellow lifted her down and left her, thanking her civilly enough, and paying her more than she had ever been paid before for such service.

Now next day happened to be market-day, and as Dame Goody had been away from home, she wanted many things in the house, and trudged off to get them at the market. As she was buying the things she wanted, who should she see but the squinny-eyed old fellow who had taken her on the coal-black horse. And what do you think he was doing? Why he went about from stall to stall taking up things from each, here some fruit, and there some eggs, and so on; and no one seemed to take any notice.

Now Dame Goody did not think it her business to interfere, but she thought she ought not to let so good a customer pass without speaking. So she ups to him and bobs a curtsey and said: “Gooden, sir, I hopes as how your good lady and the little one are as well as––”

But she couldn’t finish what she was a-saying, for the funny old fellow started back in surprise, and he says to her, says he: “What! do you see me today?”

“With the right eye to be sure,” said she, as proud as can be to find him out.

“The ointment! The ointment!” cried the old pixy thief. “Take that for meddling with what don’t concern you: you shall see me no more.” And with that he struck her on her right eye, and she couldn’t see him any more; and, what was worse, she was blind on the right side from that hour till the day of her death.

Time for you to share...what was your magic moment today? This weekend?